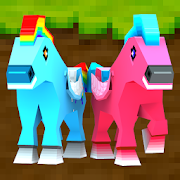 5 186 person
Description
The best building game on android is free to download.
Pony Craft is a city building game that is the best on the block.

Play one of the best free simulation games that is full of PONIES!

Start building now and before you know you’ll be the top block builder in the land. Pony craft is completely free to play for the whole family, from kids to adults.

Features:
Free Game, Play for free, No Purchases, No IAPs.
Ride Ponies, take to the skies and leave the mine building behind and ride a pony or a Unicorn!
Free Simulator game, one of the best building games that is fun and FREE!
Family Friendly Fun that can be enjoyed by boy and girls.
Free Simulation game, lets you build whatever your imagination wants. Use the blocks to build a house, or even craft your own castle.
Pixel graphics puts you in the middle of your craft empire with easy to play controls

Build your cities in amazing 3D. Learn to use the different blocks to create new things like a house, a mine or a castle in the best construction game.

PONIES!
Not only can you craft buildings, you can also adopt and ride your very own pony!

Pony Craft is one of the best building games! Once you play this free simulator game you won’t want to play any other crafting game.