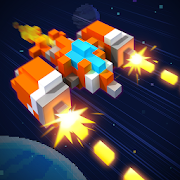 Pixel Craft (Space War) is the ultimate space shooter game rendered with 2D pixel graphics that will hook every retro-nostalgic into its Arcade gameplay. You control a plane and must travel through several hostile alien planets.

Use your dexterity to fend off incoming dangers and keep shooting down everything that moves. Play the Arcade mode by advancing from level to level, or unlock the Boss-battle mode to fight only the bosses and unlock special planes.

※ Be sure to save the game data before deleting the game or switching devices.