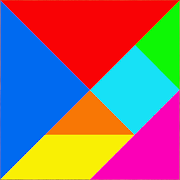 27 person
Description
The tangram (Chinese: 七巧板; literally: "seven boards of skill") is a dissection puzzle consisting of seven flat shapes, called tans, which are put together to form shapes. The objective of the puzzle is to form a specific shape (given only an outline or silhouette) using all seven pieces, which may not overlap. It is reputed to have been invented in China during the Song Dynasty, and then carried over to Europe by trading ships in the early 19th century. It became very popular in Europe for a time then, and then again during World War I. It is one of the most popular dissection puzzles in the world. A Chinese psychologist has termed the tangram "the earliest psychological test in the world", albeit one made for entertainment rather than for analysis.

In this game, we provide hundreds of puzzles in various categories, including animals, human, alphabet, digit, boat, geometry, building, zodiac, Chinese zodiac and other stuff.
Even more, a Christmas package is provided for the incoming holiday,including Santa Claus,reindeer,Christmas tree,turkey and more other gifts.

It's easy to play,you can resolve the puzzles by rotating or flipping the piece and drag it to the right position.
Hint is available if you need a clue. Resolve it as fast as you can, the best score will be recorded for each puzzle.

All puzzles are avaiable for free and you can start from any puzzle as you like.
Additional informations
Published/Updated Date