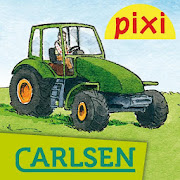 Pixi-Book “A Day on the Farm”

-great fun reading and listening
-many funny animations
-witty sound effects
-captions can be switched on or off
-Picture Puzzle
-Pixi Hobby Tip!
-Pixi-App Bonus: an extra soundtrack for children and adults to record their own story!

Antonia lives with her family on a farm. One day her friend Lena visits her. She shows Lena all the animals that live on the farm: geese, chickens, cows, pigs, goats. Antonia and Lena also learn what farmers plant and harvest. At night they get to sleep in the hayloft! A wonderful farm adventure!