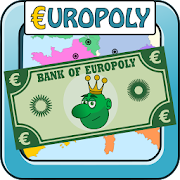 Roll the dice, move your pawn, buy properties, make deals, acquire monopolies, build houses and force your opponents to bankruptcy. All this and much more is enabled in Europoly, the real-state board game that you will love.

A Europoly game can be played by 2, 3 or 4 players. Each one has a pawn for traversing Europe. If a pawn lands on an unowned property, she can buy it or auction it. But if that property is already owned by another player, she has to pay the rent. The overall goal of the game is to remain financially solvent while forcing opponents into bankruptcy.

The board is designed to perfectly fit your phone or your tablet. The squares include European cities and airports, motorway, ferry, casino cards, lottery cards and a jail. The player with the floor throws two dice and moves clockwise around the board. A player who lands or passes the Start square collects 5,000€. If a player rolls doubles, she can roll in her turn. After three consecutive sets of doubles, she has to go to jail.

Cities are arranged in groups with the same color. The player who owns all the cities of a group has a monopoly and will be allowed to build houses, increasing the rent that is received. Transport squares cannot be developed, but the given rent increases if a player owns more than one of either type.

If a player needs money, she can trade with other players, sell her houses or mortgage her properties. Players cannot collect rent on mortgaged properties, but they can be unmortgaged by paying the stipulated amount to the bank. If a player cannot pay her debts (even selling her houses and mortgaging her properties), she must declare bankruptcy. The winner of the game is the remaining player left after all the others have gone bankrupt.

You can play Europoly with other bots or with humans in the same device. We have carefully crafted the Artificial Intelligence of the bots, offering 3 different and engaging levels. In the highest level, they play aggressively and are tough traders. In the intermediate level they are more relaxed and will offer better deals. In the basic level, the bots are soft and you can trick them to get good deals for your interests.

Europoly is highly configurable, allowing the following options:
* 2-4 player games
* Play with bots or humans in the same device
* 15 different avatars
* 3 levels of Artificial Intelligence
* Select the initial money
* Choose the colors of the avatars
* Adjust the game speed
* Activate sound in-game
* Ramp up positions in the "Eurometer"
* Ramp up positions in the Winning Streak and Best Game Balance leaderboards
* Get the 30 available achievements
* Check your statistics

Contact us at [email protected] and give as your feedback and request help in case of problems.

Many thanks for your support!

Do you like card games? Don Naipe is specialized in traditional Spanish card games. We also do a good job with board games such as dominoes and parchís. You can find more information at our website:
http://donnaipe.com
Additional informations
Published/Updated Date