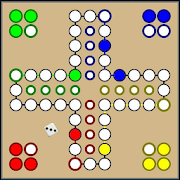 13 575 person
Description
Ludo is a cross and circle board game similar to patolli and Wahoo that involves moving a set number of pieces or marbles around the board, trying to get them into the safety zone.

The Uckers and Chaupar games are also similar to ludo with a few differences in rules.

Mensch is a board game developed in Germany by Josef Friedrich Schmidt in 1907 or 1908.

The game was issued in 1914 and sold about 70 million copies, driven by huge popularity among German troops serving in World War I It is a cross and circle game with the circle collapsed onto the cross, similar to the Indian game Pachisi, the Colombian game Parqués, the Spanish game Parchís the American games Parcheesi (Parchisi), Aggravation and Trouble the English game Ludo.

- Object: To be the first player to move all of their own pieces out of the starting area, around the board, and into home.

- Setting Up: A player must throw a 6 to move a piece from the starting circle onto the first square on the track. and a throw of 6 gives another turn.

If a piece lands on a piece of a different colour, the piece jumped upon is returned to its starting circle.

If a piece lands upon a piece of the same colour, this forms a block. This block cannot be passed or landed on by any opposing piece.

- Winning: When a piece has circumnavigated the board, it proceeds up the home column. A piece can only be moved onto the home triangle by an exact throw.

The first person to move all 4 pieces into the home triangle wins.
Additional informations
Published/Updated Date