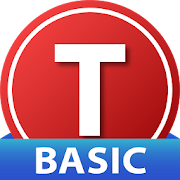 779 person
Description
Are you looking for the best free word processor for Android tablets? Look no further – Office HD: TextMaker Basic offers seamless compatibility with Microsoft Word from 6.0 up to 2016, has a superior feature set and a touch-optimized user interface. Did we already mention that it's free?

Intuitive to use: If you've already worked with TextMaker or Microsoft Word, you'll pick up Office HD: TextMaker Basic in no time. The user interface is just like the one on the PC, but perfectly adapted to touchscreen use.

The following is the feature list of Office HD: TextMaker Basic. Some of these features are available after this one-time in-app purchase.

► Open and save DOC and DOCX from Microsoft Word 6.0 to 2016 as well as OpenDocument Text, RTF and HTML, faithfully to the original
► Assistant for import and export of plain-text files
► Create PDF files and PDF forms directly in Office HD: TextMaker Basic
► Printing and mail merge via Google Print and other printing programs
► Send document by e-mail as DOC, DOCX, or PDF
► Built-in database module, lists & labels

► Outliner for structuring documents
► "Track changes" tracks all changes made to a document and lets you accept/reject them later
► Comments appear as balloons in the right margin of your pages
► Cross references, footnotes, endnotes, indices, tables of contents, bibliographies
► Captions and tables of figures
► Forms with input fields, checkboxes, dropdown lists, calculations etc.

► Draw and design directly in your documents, with AutoShapes that are fully compatible with Microsoft Word
► Insert images in a range of formats, both from files and from the Android gallery
► Mirror effects, soft shadows and transparencies
► Crop images directly in the document
► Change brightness, contrast and gamma of images directly in Office HD: TextMaker Basic
► Drawings can be filled with solid colors, patterns, images and gradients
► Wrap text around irregularly shaped graphics
► Large symbols library for flowcharts and org charts
► TextArt feature for amazing type effects
► 80 different types of 2D and 3D charts

► Nested and multi-page tables
► Cells can be sorted, merged and rotated
► Repeating headers

► Spell-check in 17 languages, synonyms in 10 languages and automatic hyphenation in 33 languages
► Typos are highlighted with a red underline
Additional informations
Published/Updated Date